Even the greatest advises didn’t affect her,
Hard to believe but she didn’t she even wonder,
How can all the people be so wrong
And she alone be right,
She couldn’t see anything
Perhaps she lost her sight.

She lived she learned,
She lost she earned,
But one thing was confirmed,
She changed when she herself discerned
The difference between wrong and right.
The difference between truth and lies.
Now looking back she has no one to blame,
Cause she didn’t let anyone control the game.
She played it until she got tired
She won’t deny that she was a little wired. 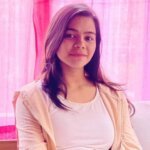 Composing poems since 2019, Muskan is a second year B.Com hons. student of Graphic Era Deemed to be University, Dehradun. She expresses her personal feelings and experiences. General and spoken poetry are her particular interests.

Bizno is open for feedback from its audience.

For feedback related to Muskan’s Poetry, reach her out at muskanbadoni2001@gmail.com .

For Feedback related to Bizno portal, reach out to us at shivsangal@gmail.com.